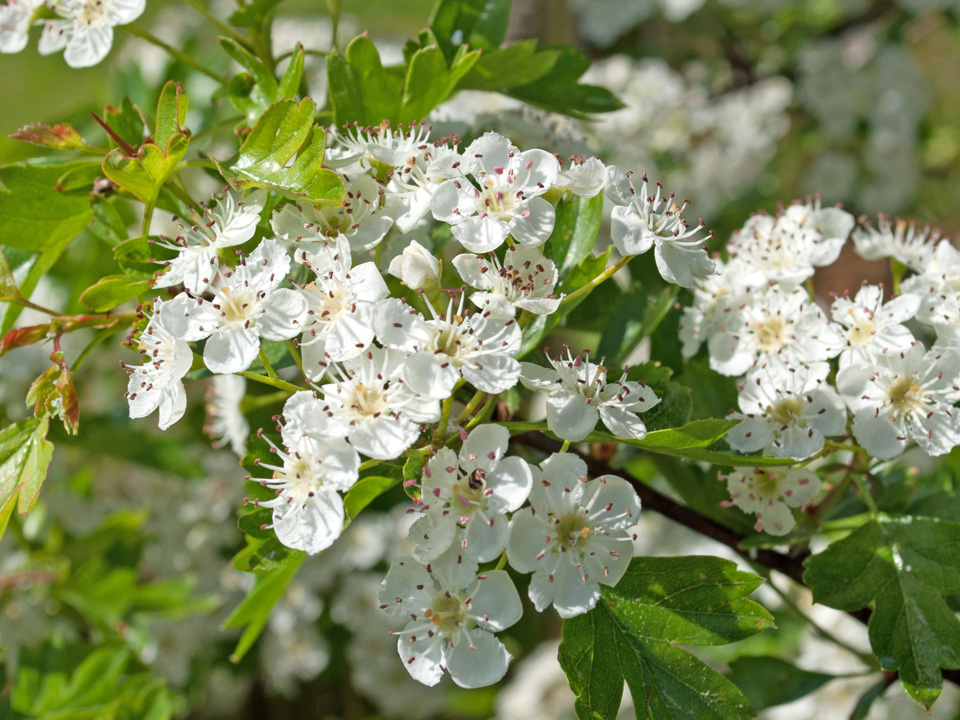 PURPOSE: This study investigates the influence of WS(R) 1442, a special extract of Crataegus leaves with flowers, on the relaxation of rat aorta and human mammarian artery (coronary bypass patients). METHODS: Experiments were performed in the presence and absence (mechanical disruption) of endothelium. In addition, we investigated three fractions of WS(R) 1442 (fraction A: lipophilic, containing flavonoids and oligomeric procyanidins (OPC), fraction B: hydrophilic, containing flavonoids and low molecular weight OPC, fraction C: hydrophilic, essentially flavonoid-free and rich in high molecular weight OPC). RESULTS: WS 1442 induced a concentration-dependent vasodilation in isolated vessel rings that had been precontracted by 10 microM phenylephrine (concentration for halfmaximal relaxation (IC(50)): rat: 15.1 +/- 0.6 microg/ml (n = 7), human: 19.3 +/- 3.4 microg/ml (n = 6)). The maximal vasorelaxation induced after application of 100 microg of WS 1442 was 75.0 +/- 5.7% (rat) and 79.2 +/- 5.8% (human) of the papaverine (0.1 mM)-induced vasodilation. If the experiments were performed in the presence of L-nitroarginine methylester (10 microM, eNOS-inhibition) or after mechanical disruption of the endothelium, no vasorelaxation was observed in the presence of WS 1442. The vasorelaxant properties of WS 1442 were mediated by fraction C. WS 1442 induced an NO-liberation from human coronary artery endothelial cells as measured by diaminofluorescein. WS 1442 induced eNOS-activation was due to a phosphorylation at serine 1177. No eNOS-translocation or phosphorylation at serine 114 or threonine 495 was observed after application of WS 1442. CONCLUSIONS: It is concluded that WS 1442, induces an endothelium-dependent, NO-mediated vasorelaxation via eNOS phosphorylation at serine 1177.

A placebo controlled, randomised, parallel group, multicentre trial conducted in accordance with the guidelines of Good Clinical Practice (GCP) shows the efficacy and safety of a standardised extract of fresh berries of Crataegus oxyacantha L. and monogyna Jacq. (Crataegisan) in patients with cardiac failure NYHA class II. A total of 143 patients (72 men, 71 women, mean age of 64.8 (8.0 years) were recruited and treated with 3 times 30 drops of the extract (n = 69) or placebo (n = 74) for 8 weeks. The primary variable for the evaluation of efficacy was the change in exercise tolerance determined with bicycle exercise testing, secondary variables included the blood pressure-heart rate product (BHP). Subjective cardiac symptoms at rest and at higher levels of exertion were assessed by the patient on a categorical rating scale. An overall assessment of efficacy at the final visit was provided by the patient and the investigator. In the ITT population there was a significant increase in exercise tolerance in both groups between visit 1 and visit 3. The difference between the treatment groups was 8.3 watts in favour of the standardised extract of fresh Crataegus berries (p = 0.045). The result is confirmed in the PP population (p = 0.047). Changes in BHP at 50 watts and at comparable maximum load were in favour of Crataegus extract but the results are not statistically significant. The subjective assessment of cardiac symptoms at rest and at higher levels of exertion did not change significantly and the patient and investigator overall assessment of efficacy were similar for the two groups. The medication was well tolerated and had a high level of patient acceptability. The significant improvement, due to the fact that dyspnoea and fatigue do not occur until a significantly higher wattage has been reached in the bicycle exercise testing allows the conclusion that the recruited NYHA II patients may expect an improvement in their heart failure condition under long term therapy with the standardised extract of fresh Crataegus berries.

Interaction study between digoxin and a preparation of hawthorn (Crataegus oxyacantha).

Hawthorn, an herbal supplement, is currently being evaluated for the treatment of heart failure. The flavonoid components of hawthorn may be responsible for hawthorn's beneficial effects in the treatment of heart failure. However, these components may also affect P-glycoprotein function and cause interactions with drugs that are P-glycoprotein substrates, such as digoxin, which is also used to treat heart failure. Therefore, the purpose of this study was to determine the effect of hawthorn on digoxin pharmacokinetic parameters. A randomized, crossover trial with 8 healthy volunteers was performed evaluating digoxin 0.25 mg alone (D) for 10 days and digoxin 0.25 mg with Crataegus special extract WS 1442 (hawthorn leaves with flowers; Dr. Willmar Schwabe Pharmaceuticals) 450 mg twice daily (D + H) for 21 days. Pharmacokinetic studies were performed for 72 hours. There were no statistically significant differences in any measured pharmacokinetic parameters. The AUC0-infinity, Cmax-Cmin, Cmin, and renal clearance for the D group were 79 +/- 26 mcg.h/L, 1.4 +/- 0.7 mcg/L, 0.84 +/- 0.2 mcg/L, and 74 +/- 10 mL/min versus 73 +/- 20 mcg.h/L, 1.1 +/- 0.1 mcg/L, 0.65 +/- 0.2 mcg/L, and 81 +/- 22 mL/min for the D + H group, respectively (p > 0.05). Following 3 weeks of concomitant therapy, hawthorn did not significantly alter the pharmacokinetic parameters for digoxin. This suggests that both hawthorn and digoxin, in the doses and dosage form studied, may be coadministered safely.

BACKGROUND: Hawthorn (Crataegus laevigata) leaves, flowers and berries are used by herbal practitioners in the UK to treat hypertension in conjunction with prescribed drugs. Small-scale human studies support this approach. AIM: To investigate the effects of hawthorn for hypertension in patients with type 2 diabetes taking prescribed drugs. DESIGN OF STUDY: Randomised controlled trial. SETTING: General practices in Reading, UK. METHOD: Patients with type 2 diabetes (n = 79) were randomised to daily 1200 mg hawthorn extract (n = 39) or placebo (n = 40) for 16 weeks. At baseline and outcome a wellbeing questionnaire was completed and blood pressure and fasting blood samples taken. A food frequency questionnaire estimated nutrient intake. RESULTS: Hypotensive drugs were used by 71% of the study population with a mean intake of 4.4 hypoglycaemic and/or hypotensive drugs. Fat intake was lower and sugar intake higher than recommendations, and low micronutrient intake was prevalent. There was a significant group difference in mean diastolic blood pressure reductions (P = 0.035): the hawthorn group showed greater reductions (baseline: 85.6 mmHg, 95% confidence interval [CI] = 83.3 to 87.8; outcome: 83.0 mmHg, 95% CI = 80.5 to 85.7) than the placebo group (baseline: 84.5 mmHg, 95% CI = 82 to 87; outcome: 85.0 mmHg, 95% CI = 82.2 to 87.8). There was no group difference in systolic blood pressure reduction from baseline (3.6 and 0.8 mmHg for hawthorn and placebo groups, respectively; P = 0.329). Although mean fat intake met current recommendations, mean sugar intake was higher and there were indications of potential multiple micronutrient deficiencies. No herb-drug interaction was found and minor health complaints were reduced from baseline in both groups. CONCLUSIONS: This is the first randomised controlled trial to demonstrate a hypotensive effect of hawthorn in patients with diabetes taking medication.