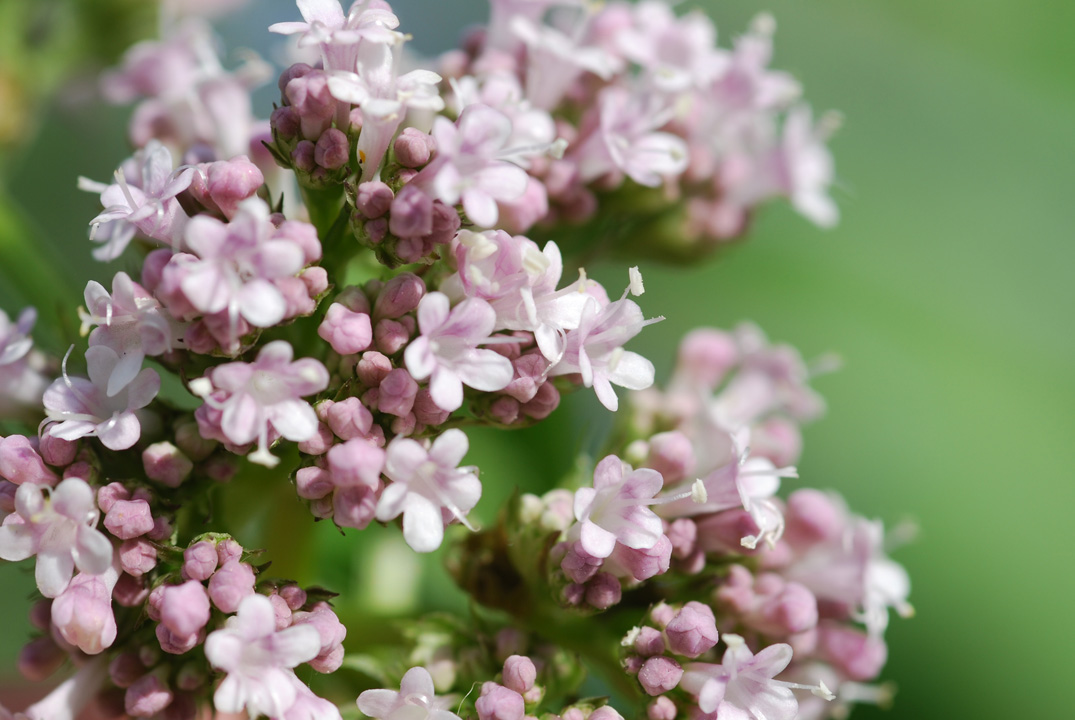 GABA(A) receptors as in vivo substrate for the anxiolytic action of valerenic acid, a major constituent of valerian root extracts.

Valerian extracts have been used for centuries to alleviate restlessness and anxiety albeit with unknown mechanism of action in vivo. We now describe a specific binding site on GABA(A) receptors with nM affinity for valerenic acid and valerenol, common constituents of valerian. Both agents enhanced the response to GABA at multiple types of recombinant GABA(A) receptors. A point mutation in the beta2 or beta3 subunit (N265M) of recombinant receptors strongly reduced the drug response. In vivo, valerenic acid and valerenol exerted anxiolytic activity with high potencies in the elevated plus maze and the light/dark choice test in wild type mice. In beta3 (N265M) point-mutated mice the anxiolytic activity of valerenic acid was absent. Thus, neurons expressing beta3 containing GABA(A) receptors are a major cellular substrate for the anxiolytic action of valerian extracts.

Repetitive administrations of valerian/hops combinations have been widely used for self-administered therapy of sleep disturbances. This investigation focuses on the question if a single administration can be an effective sleep aid. Two parallel groups of n = 20 (verum) and n = 22 (placebo) were tested. Each subject spent two consecutive nights in the lab (reference night and medication night). Medication consisted in giving verum or placebo to poor sleepers identified by a validated sleep questionnaire (Schlaffragebogen SF-B). Two ml of the liquid ex?tract or similar smelling placebo were diluted in 50 ml water (flavoured with honey) and administered 15 minutes before EEG recording during the medication night. The data analysis is based on the electrohypnogram - a method derived from a validated computer assisted automatic analysis for depth of sleep. Differences between the reference nights and medication nights were evaluated and tested for significance. Time spent in sleep (values of the sleep frequency index "SFx" of the electrohypnogram of 74% or lower) was significantly higher for the verum group in comparison to the placebo group (p<0.01). The difference with respect to time spent in deeper sleep (i.e. 68% and lower or 62% and lower) between reference and medication night was also statistically significant at p<0.01. This parameter correlated with the difference in quality of sleep between the two consecutive nights as derived from the sleep inventory SF-A sub-score (subjects evaluation) with r = 0.48 at p<0.0001. The EEG derived parameter "sleep quantity" as calculated from the electrohypnogram proved superiority of the valerian/hops combination over placebo. Thus, the present investigation has shown evidence that a valerian/hops fluid extract can be used successfully using a single administration.

Interaction of valerian extracts of different polarity with adenosine receptors: identification of isovaltrate as an inverse agonist at A1 receptors.

CONTEXT: Insomnia is a prevalent health complaint associated with daytime impairments, reduced quality of life, and increased health-care costs. Although it is often self-treated with herbal and dietary supplements or with over-the-counter sleep aids, there is still little evidence on the efficacy and safety of those products. OBJECTIVE: To evaluate the efficacy and safety of a valerian-hops combination and diphenhydramine for the treatment of mild insomnia. DESIGN AND SETTING: Multicenter, randomized, placebo-controlled, parallel-group study conducted in 9 sleep disorders centers throughout the United States. PATIENTS: A total of 184 adults (110 women, 74 men; mean age of 44.3 years) with mild insomnia. INTERVENTIONS: (1) Two nightly tablets of standardized extracts of a valerian (187-mg native extracts; 5-8:1, methanol 45% m/m) and hops (41.9-mg native extracts; 7-10:1, methanol 45% m/m) combination for 28 days (n = 59), (2) placebo for 28 days (n = 65), or (3) 2 tablets of diphenhydramine (25 mg) for 14 days followed by placebo for 14 days (n = 60). OUTCOME MEASURES: Sleep parameters measured by daily diaries and polysomnography, clinical outcome ratings from patients and physicians, and quality of life measures. RESULTS: Modest improvements of subjective sleep parameters were obtained with both the valerian-hops combination and diphenhydramine, but few group comparisons with placebo reached statistical significance. Valerian produced slightly greater, though nonsignificant, reductions of sleep latency relative to placebo and diphenhydramine at the end of 14 days of treatment and greater reductions than placebo at the end of 28 days of treatment. Diphenhydramine produced significantly greater increases in sleep efficiency and a trend for increased total sleep time relative to placebo during the first 14 days of treatment. There was no significant group difference on any of the sleep continuity variables measured by polysomnography. In addition, there was no alteration of sleep stages 3-4 and rapid eye movement sleep with any of the treatments. Patients in the valerian and diphenhydramine groups rated their insomnia severity lower relative to placebo at the end of 14 days of treatment. Quality of life (Physical component) was significantly more improved in the valerian-hops group relative to the placebo group at the end of 28 days. There were no significant residual effects and no serious adverse events with either valerian or diphenhydramine and no rebound insomnia following their discontinuation. CONCLUSIONS: The findings show a modest hypnotic effect for a valerian-hops combination and diphenhydramine relative to placebo. Sleep improvements with a valerian-hops combination are associated with improved quality of life. Both treatments appear safe and did not produce rebound insomnia upon discontinuation during this study. Overall, these findings indicate that a valerian-hops combination and diphenhydramine might be useful adjuncts in the treatment of mild insomnia.